“It’s been raining a lot lately.” she said walking with a cup of tea towards the window. Her soft features against the grayish white morning light, looked like a painting. I was happy to be the only spectator of this beauty. A sleepy happy.

“It is the rainy season, no?” I replied drowsily. Smiling, nestling my face back into the cool clean pillow.

Not looking, I laughed and said,”Come back here you. No mention of the “w” word, okay. This day is ours. We deserve it.”

When I didn’t hear anything, I stole a peek from where I lay. She stayed sitting by the window. Sipping her tea slowly immersed in thought. As if she was in another world already. Smiling contently.

“It’s not possible. When you’re ‘visiting’ another place, you become absent in the place you began with.”

She puts her cup on the window sill. Letting it continue her sightseeing as she climbed back into the crisp white covers with me.

“But you’re here aren’t you? With me. In this nice hotel on a weekday. Lying to your boss. Calling in sick.” I hugged her close making sure her whole being feels my energy and presence.

“Yes.” she kissed my hands that met in front of her. Lovingly, each finger, then the insides of my palms. As if saying, “I love these chubby hands.”

“I love this kind of music.” She said commenting on the contemporary gamelan instrumental playing in the background. It had some nature sounds mixed into it. Giving off a fake feeling we’re not in the center of a crowded messy city but somewhere exotic.

Then she goes on telling me how she received a CD from a hotel in Singapore where she stayed at for business, in return for a comment she wrote in their guest comment sheet saying that she loved the hotel channel’s welcome music. She said the hotel was such a waste because she stayed there alone for two nights with a spectacular view of the Singapore Flyer. 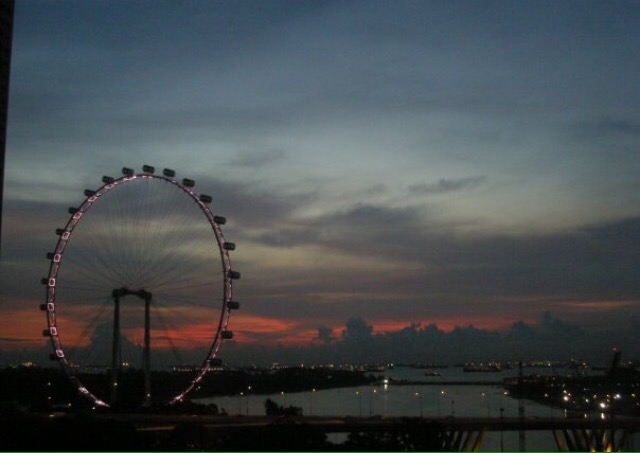 “I really wished I was staying there with someone. I sat by the window. Drinking in the view and cried thinking how badly I wanted to share it with someone.”

I felt the longing in her voice and hugged her tighter.

I apologized and loosened my hug.

“It hurts when I know you’re on good terms with her. It hurts even more, when I realize I’m the bad guy that secretly smiles when things go wrong with her.”

She curls herself into a ball. Denying my efforts to pull her back into my embrace.

“It hurt the most the first time, though. When you were so serious on telling me to go home. It felt like, you got what you wanted and after that you wanted me to get lost. I know your intentions were right. We should be extra careful. And I’m not known for going home late. But still, it hurt and I don’t want to feel that hurt again, ever.” she paused. “All I wanted was to cuddle for a few more minutes.” and her voice cracked.

I pulled her to face me. Tears were running down her cheeks.

“I’m sorry.” I said with all the sincerety I had inside. Looking deep into her wet seeing marbles.

She closed them and shook her head.

But the water on the window and on her cheeks continued to flow.
#MaretMenulis