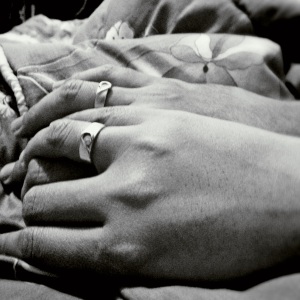 #nowplaying All For You – Janet Jackson

She plays with the ring on her finger. It has been there for three years. It goes with her to work, to bed, even to the toilet. It goes with her everywhere. Half of a heart made of white gold with a tiny diamond handed down from one of his mother’s rings. It matches his and twinkles occasionally and that is enough for her.

Is she happily married? She would say ‘yes’ without hesitating sometimes. But, when things aren’t going according to her expectations, that ‘yes’ would take time coming out. Sometimes it will be replaced with a frown or even a (flood of) complaint(s). But complaints are healthy. It means there is something that needs to be fixed. It means there is someone pointing out that something instead of forever holding her silence eventually allowing the problem to worsen. It means there is still hope.

The times when she complains, must be when she forgets that she was once single and desperately seeking too. Struggling to abide to societal norms, her desires to find someone like her father and have cute babies like her big brother. Someone to talk to and giggle with in bed, so her children can hear them and get the same warm and fuzzy feelings she had living in the room next to her parents.

The times she complains, she must have forgotten all the let downs, the boys that came and left, sometimes without saying goodbye or saying anything. Just disappearing as if they’re Houdini or something. What can she say about them except for that they just weren’t meant to be hers and she wasn’t meant to be theirs. As simple as that.

The man she is married to doesn’t write her incredible poems or take awesome photographs nor is a living walking encyclopedia.

The man she is married to snores, won’t touch the dirty dishes, and is a Manchester United fan.

But the same man tucks her into bed, puts away the smartphone she falls asleep with and sometimes even plugs it in for charging, and laughs with her.

Which is enough for her to say that she is happily married.