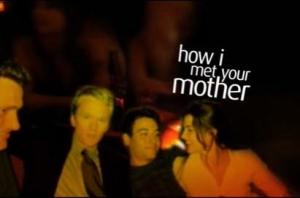 Thank Heavens, we’re through being F.R.I.E.N.D.S.

While we were all mellow about the final season of Friends, little did we know that another New York gang was creeping up behind our backs and ready to take the place of Rachel, Ross, Joey, Phoebe, Chandler and (what’s her name?). MONICA! Sorry, Monica. Please don’t pelter me with a million cupcakes. I said I was sorry didn’t I? Sheesh, you fanatic fans. Get a life. Or get in bed with Gunther, for all I care.

Well, what I’m trying to say is enough with those old geezers already! *looks away from TV, Cougar Town is on*. Gain way for Ted Mosby!

I saw this sitcom for the first time around 2 years ago on StarWorld. The sitcom starts with what seems to be a modern looking family room where there were two teenagers, a boy and a girl sitting comfortably in a couch with indifferent looks on their faces. Then comes the voice over of their father (Bob Saget of Full House), “Kids |pause|, sometimes life kicks you in the– bla bla bla…” and the scene changes into a pub where 5 young professionals hang out.

It turns out that the two teenagers are the children of Ted Mosby, who is (still) telling the (already 6th season) story of how he met their mother, so the title of the sitcom goes. And we the innocent audience wait patiently season after season after season wondering, ‘Oh! Oh! I bet it’s this girl! It’s not? Then it must be Robin! It just HAS TO BE! Oh? Not Robin either? THEN WHO THE *(%&$&(#$&($@$ IS SHE?????’

Well folks, we’ll just have to wait until all them actors, directors, scriptwriters and crew have went on their trips around the world with the big-fat-checks they earned, get married on an obscure island in the Carribean, and adopt babies from Africa and Indonesia. THEN, we will know who the mother of Ted Mosby’s kids is (are?).

Well, apart from constantly sitting on the edge of our tikars, this sitcom has several perks that make it shine brighter than Friends. They got damn fresh ideas, such as implementing quick setting changes in one scene called Ted’s Two Minute Date. Or like this one episode where the 5 talk about each others’ dopplegangers was hilarious!! Bottom line, they’ve worked hard in improvising and upgrading us Friends fans to a higher level of silliness.

♥While we’re still busy comparing, why not point out the similarities of the two sitcoms. Ted Mosby = Architect Professor vs Ross Geller = Palaentologist working for a museum. Joey Tribbiani = Player, Actor vs Barney Stinson = Player with a suit. Marshal + Lily vs Chandler + Monica and Robin the toned down version of Phoebe. Sorry Rachel, you were never really needed in Friends anyway [[IN MY ‘OH I KNOW YOU’LL HATE ME FOR IT’ OPINION]].

♥The whole story is loosely based on the friendship of it’s creators Bays and Thomas and his wife. Mrs. Thomas initially refused for her life to be protrayed on television, unless they could get Alyson Hannigan to do it. So they did!

DVD’s available at Ambass or other bootleg stalls near you. woops..

6 thoughts on “How I Met Your Mother”